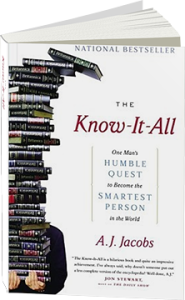 The Know-It-All: One Man's Humble Quest to become the Smartest Person in the World

Part memoir, part Cliff’s Notes to every topic under the sun, The Know-It-All is about the year I spent reading the Encyclopaedia Britannica from A to Z (or, more precisely, from a-ak to zywiec). All forty-four million words of it. The book is many things: First, it’s a compendium of the funniest, most fascinating, and most profound facts I uncovered-from the history of canned laughter to Nathaniel Hawthorne’s obsessive-compulsive behavior to female spies in the Civil War. Second, it is a search for meaning and wisdom among that ocean of facts. Third, it’s a memoir of my eccentric, knowledge-loving family. (My dad, for instance, holds the world record for the most number of footnotes in a law review article: 5,435.) And finally, it is a series of adventures to test the limits of intelligence. I competed in a crossword-puzzle tournament, went on Who Wants to Be a Millionaire, and attended a Mensa convention. And if that’s not enough, it’s a mere 1.4 pounds, as opposed to the Britannica’s 128 pounds. That’s my summary, anyway. Though I kind of like the way The Philadelphia Inquirer put it, since I can’t say the things they say without looking like a self-promoting putz. Well, more of one, anyway. “The Know-It-All has to be one of the most entertaining and informative book reports in existence. It is charming, humorous, instructive, fascinating, even kind of inspirational. But Jacobs’ book is more than that. He puts it all into the context of his life, and a text that could have been utterly dry winds up charming us with Jacobs’ honesty and vulnerability. Jacobs is courageous enough to risk looking stupid by sharing his quirks and insecurities . . . and he wins the gambit. He comes across as nothing short of endearing.”

“The Know-It-All is funny, original, and strangely heroic. I found myself rooting on Jacobs’s quixotic, totally endearing quest.” –Jonathan Safran Foer, New York Times bestselling author of Everything Is Illuminated

“Mighty intelligent. . . . It would be so easy to write about the humorous passages and give short shrift to the underlying serious inquiry into the nature of knowledge. The Know-It-All is the most serious funny book I can recall reading during my 56 years. I cannot imagine any avid reader skipping a word.” –The Atlanta Journal-Constitution

“The Know-It-All is a terrific book. It’s a lot shorter than the encyclopedia, and funnier, and you’ll remember more of it. Plus, if it falls off the shelf onto your head, you’ll live.” –P.J. O'Rourke, New York Times bestselling author of Peace Kills

“A.J. Jacobs turns the act of reading the entire Britannica into a hilarious memoir. . . . It’s the stunt of the book itself that allows the funny, touching memoir to be so stuffed with nutritious bits of trivia that you feel smart for reading it.” –Time

“Jacobs’ ability to juxtapose his quirky, sardonic wit with oddball trivia makes this one of the season’s most unusual books.” –Publishers Weekly

“Tender . . . Entertaining . . . This book really does seek a working definition of what it means to be smart.” –Janet Maslin, The New York Times

“The Know-It-All is a hilarious book and quite an impressive achievement. I’ve always said, why doesn’t someone put out a less complete version of the encyclopedia? Well done, A.J.” –Jon Stewart, Host of The Daily Show and New York Times bestselling author of America (The Book)