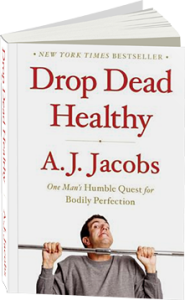 Having achieved enlightenment in The Year of Living Biblically and sharpened his mind in The Know-It-All, bestselling author A.J. Jacobs had one feat left in the self-improvement trinity: to make over his body and become the healthiest person in the world. In Drop Dead Healthy: One Man’s Humble Quest for Bodily Perfection, the intrepid Esquire editor-at-large explores every aspect of the body, from biceps to the brain, from testosterone to toenails, to get into shape. A self-described ‘mushy, easily-winded, moderately sickly blob’ Jacobs, at the urging of his family, vowed to retool every part of his long-neglected body. The task was massive.

He assembled a team of expert medical advisers, a group that included A-list doctors, researchers, nutritionists and trainers. He pledged to disentangle medical myths from reality. He listened to his sage, 96 year-old grandfather’s advice, as well as the chiding of his hippy aunt, Marti. He made a 53-page list of things to do to improve his health. It includes everything from the traditional “eat leafy green vegetables” and “lift weights” to the unusual “win an Academy Award” (Oscar winners live three years long than non-Oscar winners) and hum to prevent sinus infections.  Then, over the course of two years, he subjected himself to a grueling but entertaining regimen of exercise, diets and experiments that yielded surprising insights-and tested the patience of his wife, Julie.

Jacobs broke down his quest body part by body part, from lungs to stomach to brain to lower back and beyond. Among his adventures:

Part memoir, part adventure, part how-to manual, the book is as uproariously funny as it is informative and inspiring. All the while, it tests our culture?s assumptions and obsessions with what makes good health and allowing the reader to reflect on his or her own health, body, and eventual mortality.

For despite his success-a transformation Jacobs proves with data, photographs, and inspiring narrative-good health emerges in these pages as a means to a simple end: a life well-lived. In the end, Jacobs sets aside his full-time, nonstop obsession with healthy living and once again shares a cupcake with his young sons.

“Jacobs achieves an instant intimacy with the reader, making his family life as much a part of the narrative as his many meetings with medical theorists and health gurus. He’s a clever humorist who successfully takes his readers on a round trip from reality to absurdity, dispensing solid, valuable health information along with fascinating oddities.” –Publishers Weekly

“Jacobs returns with another delightful look at self-improvement…[his] account of his journey is engrossing and will have readers chuckling at the measures he takes in pursuit of perfect health. Readers with health and fitness interests will eagerly devour this book; it may also provide inspiration for those attempting to make healthier lifestyle choices.” –Library Journal

“The virtuoso of the self-as-guinea-pig genre” –Time magazine

“Jacobs' experiments are about understanding oneself, making life more interesting and showing the reader a good time. And I love them for it.” –San Francisco Chronicle

“[T]he most enlightening moments are driven by his honesty, his sense of humor, and his willingness to constantly challenge his ingrained assumptions… Hilarity, and quite a bit of learning, ensue…In the GUINEA PIG DIARIES, he once again achieves a rare literary balance––an intellectual study of human behavior that will make readers laugh out loud or, in the more daring cases, inspire them to try one of these experiments for themselves.” –Providence Journal

“THE GUINEA PIG DIARIES is as funny and as instructive as memoir can get.” –Knoxville News-Sentinel