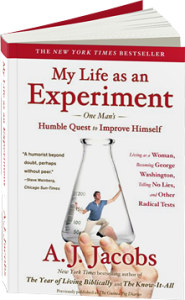 My Life as an Experiment: One Man’s Humble Quest to Improve Himself

On a mission to improve every aspect of my life – from love to work to happiness – I became a human guinea pig. I immersed myself in a series of radical lifestyle experiments. I changed the way I thought, talked and looked. I followed old wisdom and new science. I saw the world from the eyes of a woman. I followed the wisdom of George Washington. I outsourced my life. I engaged, I’m afraid to say, in public nudity. (Not all at the same time).

These projects wreaked havoc on my life, and drove both my wife and me to the brink of insanity, but also gave me fascinating insights.

Among the experiments in ‘My Life as an Experiment‘ (Which was published in hardcover with the title ‘The Guinea Pig Diaries’):

What Would George Washington Do:
Living in an increasingly uncivil world, I decide to take radical measures: I follow in the footsteps of George Washington. I adhere to the Founding Father’s “110 Rules of Civility and Decent Behavior in Company and Conversation.” I learn about dignity, compassion, and the timeless social benefits of a properly executed bow. I also refrain from adjusting my private parts in public. That is Rule Number 11 in George Washington’s list. Really.

The Unitasker:
I was so distracted – by the internet, by my cell phone, by snacks beckoning from the kitchen – that I was four months behind deadline in writing this book. So I became the Unitasker. I pledged to quit multitasking. I decided to rewire my brain to I will be the most focused person alive. I unplugged my laptop, I meditated, I talked on the phone – just talked, no surfing the internet at the same time – crazy, no? (it helps that I blindfolded myself). I literally tied myself to my desk chair. It did end up changing my life. I’ve come to believe multitasking isn’t just a minor problem, it’s the Eleventh plague.

I Think You’re Fat:
I became a temporary convert to the Radical Honesty movement, which teaches that you should never, ever lie. But more than that, you should say whatever’s on your mind. You should remove the filter between your brain and your mouth. This was the worst month of my life. I had to spend the following weeks apologizing to everyone I offended. But it was also one of the most illuminating.

240 Minutes of Fame:
Venturing into the world of celebrity worship, I assumed the identity of actor Noah Taylor (to whom I bear an eerie resemblance) and crashed the Academy Awards. I gave autographs, took interviews and rubbed elbows with other celebrities. I watched my ego be warped by fame.

My Outsourced Life:
Why should Fortune 500 companies have all the fun? I hired a team in Bangalore, India, to take care of everything in my life. And I mean everything. My e-mails, phone calls, shopping, arguments with my wife and reading bedtime stories to my son.

The Rationality Project:
I tried to retrain my brain to be something more than an ad hoc collection of half-assed solutions that have built up over millions of years of evolution. I attempted to eliminate every irrational bias using the insights of behavioral economics. And in doing so, I permanently changed the way I make every decision, from the simplest (what toothpaste to buy) to the biggest (how to raise the kids).

My Life as a Beautiful Woman:
To understand the world of dating from a woman’s point of view, I appropriated the identity of Michelle, my children’s gorgeous nanny, and venture into the land of online dating. Interacting with men as a beautiful woman gave me a unique look at the male species from the other side. I saw the expected sleaziness, but also the unexpected vulnerability.

The Truth about Nakedness:
Esquire asked Mary-Louise Parker to pose nude, and she said she would do it only if the editor of the piece also posed nude. I was the editor. My boss told me to take off my pants and get in front of the camera. I learn priceless lessons in objectification and the value of good lighting.

Whipped (a.k.a. the perfect spouse):
At the suggestion of readers who point out that my wife is a saint, I vowed to spend a month agreeing to her every command. Sure, it was a month of Kate Hudson movies and foot massages -but also of stereotype-shattering insights into the politics of the modern American marriage. Plus, at one point, I had wear a male chastity belt. (It comes in three varieties-clear plastic, wood-paneled and camouflage!) And Julie gets to write the final section.

Some of these guinea-pig-diariess got their start in Esquire magazine, others are all new. And each of them comes with a conclusion about the lessons I’ve learned. Plus, my wife writes a rebuttal you don’t want to miss.

“‘Immersive journalism’ is a rather popular trope these days, and GQ editor A.J. Jacobs is one of its most entertaining adherents, performing a public service with his quest for knowledge in his latest book, THE GUINEA PIG DIARIES…His experiments, alternately Herculean and banal, are emblematic of how difficult it is in this modern age to find enlightenment; ‘know thyself’ regularly brushes up against the cold, rocky bottom of daily life.” –L.A. Weekly

“Jacobs…could be the funniest nonfiction writer this side of Bill Bryson…The experiments themselves are fascinating and lead to genuinely surprising conclusions…and Jacobs’ storytelling is lighthearted and frequently laugh-out-loud funny…There aren’t a lot of nonfiction books you want to read over and over, but this is certainly one of them.” –Booklist, starred review

“Jacobs continues his unique brand of immersion journalism…[and] his style is crisp and often laugh-out-loud funny….[An] endearing and nimble look at how pursuing absurd extremes can illuminate the more mundane aspects of contemporary existence.” –Kirkus Reviews

“Jacobs, a kind of latter-day George Plimpton, tests…our funny bones once again with his smart-aleck, off-the-wall and uproarious experiments in living.” –Publishers Weekly

“The virtuoso of the self-as-guinea-pig genre” –Time magazine

“Jacobs' experiments are about understanding oneself, making life more interesting and showing the reader a good time. And I love them for it.” –San Francisco Chronicle